Did you just catch a glimpse of what looked like an underwater centipede?

Do you own a saltwater aquarium?

If you answered yes to both of these questions then it’s likely your tank is playing home to bristle worms.

When it comes to bristle worms, the community is divided. Some believe they form an important part of a healthy ecosystem, while others think these creepy critters should be killed on the spot.

Let’s take a closer look at this controversial creature…

Bristle worms (or bristleworms) are nocturnal segmented worms from the Polychaete family.

Polychaete means “many hairs” in Latin. And if you’ve seen a bristle worm, you will know exactly why the scientists who discovered bristle worms settled on this name.

On either side of the bristle worm’s segmented body you can see hundreds of tiny hairs: 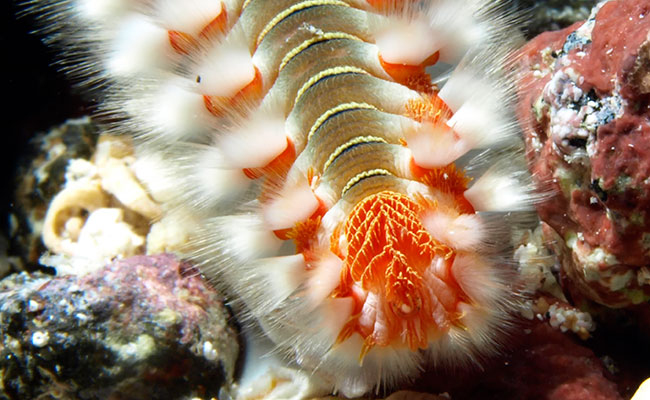 It is these hairs, or ‘bristles’, that inspired the name.

It is worth mentioning that “bristle worm” is a label used to describe all members of the Polychaete family.

Because of this, many different types of creatures fall under the “bristle worm” name.

Here are just a few of them…

There are over 10,000 different species of bristle worms.

Both of these types of worms can elongate or contract their bodies to help them fit into tiny holes.

Because of this, determining the true length of a bristle worm can be difficult. For example, a 3-inch-long bristle worm can stretch out to over 7 inches long or shrink down to about an inch and a half.

The same worm can also flatten its body to about 2mm in height. As you can see, bristle worms are versatile shape-shifters.

Because there are so many different species of bristle worms, it can be difficult to tell exactly what you have in your tank. 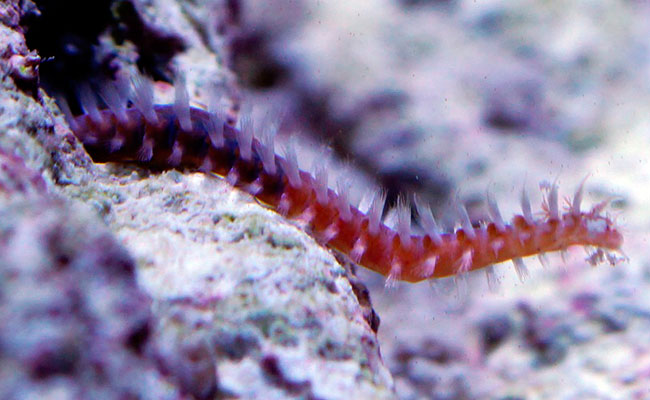 Also known as the “good” bristle worm. This covers any bristle worm that can co-exist peacefully with your fish tank.

These bristle worms are often pink or gray in color and are considered harmless.

Even so, you will still want to wear aquarium-safe gloves if you intend on handling them. 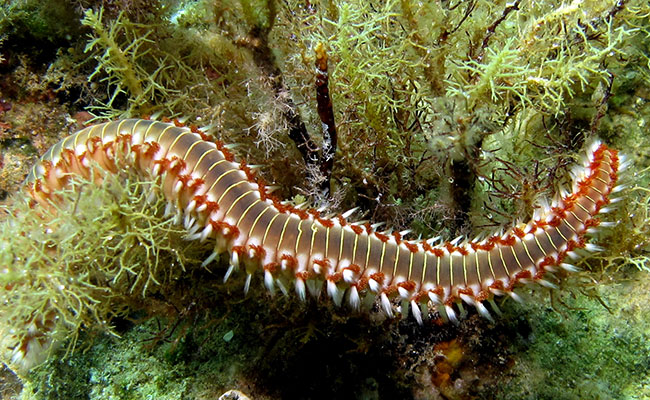 Fireworms get their name from the bright white tufts of bristles.

Touch one and it feels like, you guessed it, fire. You will feel an immediate burning sensation.

Fireworms are identified by their heavier body and much more pronounced bristles – a clearly visible white. Fireworms often have a reddish color on the outskirts of their bristles.

The bristles of fireworms stick into the flesh of any fish (or human hand) that gets too close.

However, these bristles are not lethal and act as a deterrent to fish and humans alike. The sensation has been described as being similar to the average bee sting. Once touched, you likely won’t make that mistake again!

There are over 120 different species of fireworms. Aside from the sting, they are as harmless as the common bristleworm.

But when hobbyists talk about fireworms, they are referring to one nasty species in particular…

This fireworm feeds on corral.

While this type of fireworm is incredibly rare in hobbyist aquariums, there are still reported cases of it appearing in captivity.

This is due to the negative image of fireworms that many hobbyists have, causing them to trap and remove any bristle worm the moment it is discovered.

While fireworms and “bristleworms” may look similar, when compared side by side the differences become apparent….

Still can’t identify what that creature is in your tank?

Forums like reef2reef and Nano-Reef have a community of enthusiastic reef aquarium owners that can help answer your question.

Checking for bristle worms – how to find them 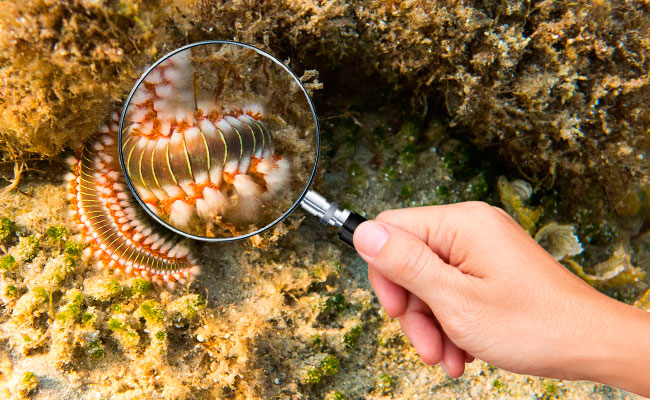 You could have a whole family of bristle worms hiding in your tank and not even know about it.

That’s because bristle worms are nocturnal…

Unless they are starving, bristle worms prefer to come out at night.

During the day, bristle worms hide in rock crevices, sand or any other gaps they can squeeze themselves into – the darker the better.

So your best opportunity to spot bristle worms is at night.

The problem is, as soon as you turn on the lights, the bristle worms will scurry away into whatever dark corner of your tank they were hiding in.

That’s where red light comes in. Like many animals, bristleworms cannot see red light and will go about their activities as if the tank is still shrouded in darkness.

But while they can’t see you, you can certainly see them.

The easiest way to make red light is to get your torch and shine it through red cellophane or another red colored plastic.

Otherwise there are red flashlight apps that you can download on your phone.

With your red light, you will now be able to do some midnight detective work to determine whether or not your tank is home to bristle worms.

What do bristle worms do in your tank? 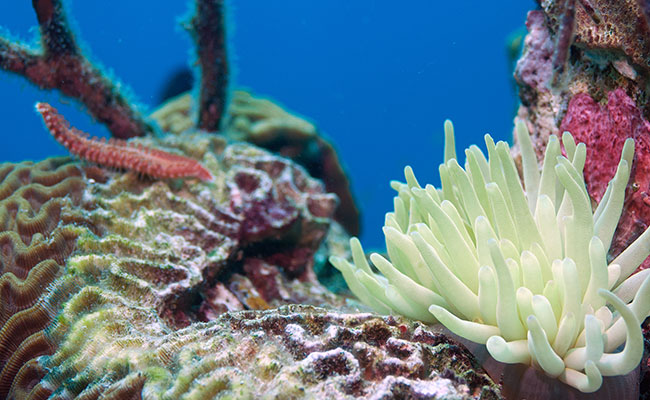 Normally when someone says “I have worms,” it’s a bad thing.

But, unless your bristle worms are actually the “bad” variety, you will find that bristle worms bring with them a range of benefits for your tank.

Bristle worms are bottom feeders – they scavenge for anything that falls to the bottom of your tank.

Detritus: algae, uneaten fish food and even poop. It’s all a tasty meal for a bristle worm.

Best of all, they can excavate their ‘food’ from tiny holes, cracks and crevices and are considered “coral safe”.

Best of all, they can squeeze into tight cracks to get to their meal.

Oh, and they eat fish too.

Many people wrongly blame bristle worms for killing their fish.

Let’s face it, if you saw a bristle worm chowing down on the carcass of your prized clownfish, you would assume it was the bristle worm’s fault.

The bristle worm is just trying to remove the body before it gunks up your tank.

The last benefit of bristle worms is that they can stir up the sand at the bottom of your tank, keeping it aerated.

It’s funny, isn’t it? Most people will pay good money to introduce a cleanup crew to their reef tanks while removing another that does the same thing.

While they may be creepy, if you can accept bristle worms into your marine ecosystem they can contribute to happy and healthy fish.

And because they prefer to come out at night, you won’t have them on display during the day either.

So now for the big question:

Where do bristle worms come from?

One day your tank is bristleworm-free and the next it isn’t.

Bristle worms appear as if by magic.

But the answer to the question is actually very simple:

It turns out that you likely put them in there. You just didn’t realize it.

That last live rock or bag of live sand you purchased? Well it might have had a stow-away.

When bristle worms are hiding away, they are virtually undetectable. And because of their ninja-like skills, they are easily transported from one tank to another.

Are too many bristle worms a problem? 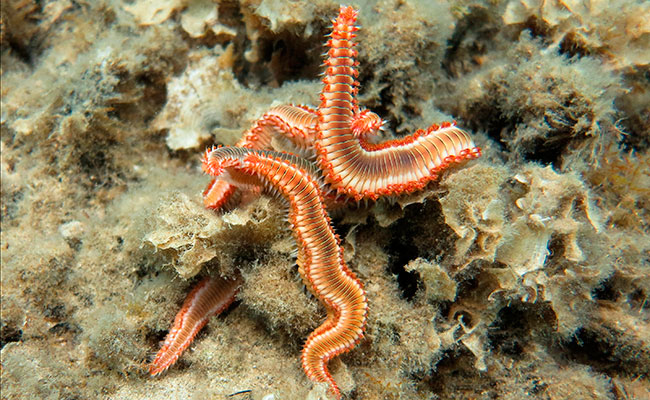 If you discover that your reef tank is home to many bristle worms, you might have a problem.

You see, bristle worms only rapidly increase in numbers when there is an abundance of food.

And because bristle worms are bottom feeders, the cause is too much algae, left-over food or rotting animals.

Without all the bristle worms, you would have very foul water.

So if you see zillions of bristle worms, they are actually doing you a favor. If you remove the food source, the bristle worms will starve and die off.

How to get rid of bristle worms

While aquarium stores sell special worm traps, I have had the best success with the homemade method.

All you need is an empty plastic bottle, a drinking straw and bait.

if you have a particularly large bristle worm you can use a turkey baster to suck it out of your tank.

Otherwise you can go down the natural route and include a natural predator in your saltwater tank.

These sea creatures will literally eat your bristle worm problems away. You will need to make sure that the species you choose will not impact the rest of the inhabitants in your tank.

Should you remove bristle worms from your aquarium? 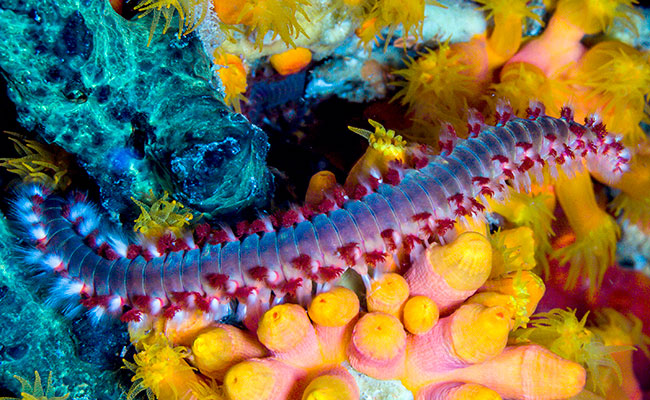 It’s a decision only you can make.

Bristle worms are an oddity.

You don’t pay for them, they show up unannounced and just get to work doing their own thing.

Given the detailed planning that you have put into your marine tank, it can be hard to accept when something unplanned, like a bristleworm, suddenly appears.

Yet they are actually suited for saltwater tanks.

If you are like me, you are probably guilty of feeding your fish a little too much or not cleaning the tank as often as you should.

And then there’s the task of removing all the death. While you likely remove any dead fish, what about rotifers, hermit crabs, snails, and plant matter?

Bristle worms will get rid of all that for you.

The only time I would recommend removing them is if:

1. You have a larger or problematic fireworm.

2. You are creeped out by them.

3. You already have a cleanup crew.

Number 3 is an important point. You don’t have to keep bristle worms in your tank if you don’t want to.

There are plenty of friendlier looking creatures that are capable of doing the exact same job.

So remove them. Or don’t. The choice is entirely yours.

What do you think about bristle worms? Let me know in the comments below!

Bristleworms can be stubborn things and it’s possible that they will survive the transfer.

Hi. We have a relatively new saltwater tank. We know we have worms. But we are not sure which ones. I have some pictures but it wont let me attach them. I have some that are bright orange like the “good worms”. Then I have one we just found that is a darker color like grayish. He is hiding in a ridge in the live rock. How can we be sure if it is a good worm or bad worm?