Home » Disease » How To Identify Pond Fish Diseases On Time

Most pond owners are under the impression that fish diseases are primarily introduced and passed on by sick fish.

However, this is rarely the case, and it’s usually up to whether your fish are healthy. In fact, more than 90% of the diseases are caused by inappropriate living conditions such as inadequate nutrition and poor water values.

Another sad reality is that illness in fish, unlike animals, are harder to detect, and often subtle changes in their behavior can signal that something is wrong.

Fish diseases are difficult to spot without close inspection, but many conditions and diseases bring about a change in behavior for sure.

So let’s take a closer look at some of the signs and symptoms to look out for and how to treat fish diseases.

How to spot that something is wrong in the pond? 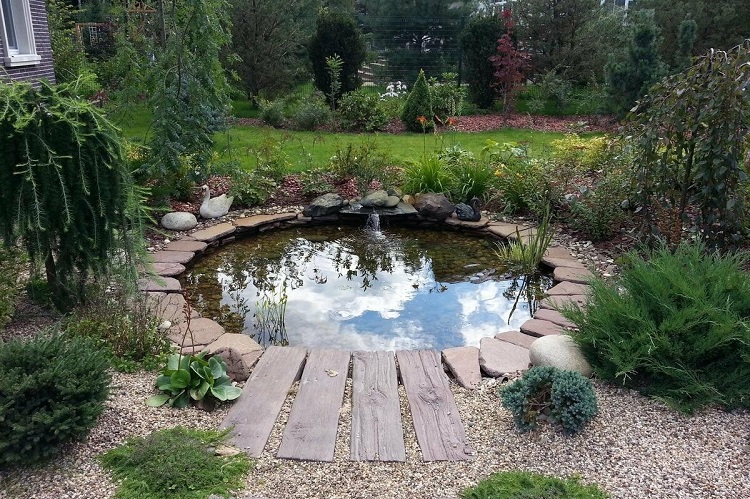 The first warning sign that something is wrong in your pond is observing the behavior of your fish. Some things to be on the lookout for include lack of appetite, flashing, open sores, diving, or gasping at the surface.

These are all warning signs that your fish are unwell. So get closer to the fish and inspect them for red sores on fins or mouth as these are signs of bacterial infection.

White spots or a cottony appearance are signs of a parasite or fungal infection. Also, be on the lookout for fish gasping at the pond’s surface as it is an indication or signs of stress from a lack of oxygen.

A happy and healthy fish will swim at a normal pace and is alert and aware of its surroundings. It will, therefore, react quickly when food is introduced.

So if you notice that your fish is resting on its side with fins clamped together and they don’t respond as soon as the food is thrown into the pond, then that’s the first sign that something is not right.

Once you have established that there’s definitely something wrong in your pond, it’s time to test the water. Proper water chemistry is fundamental and imperative to a healthy environment for your fish and will often be the lead cause of disease in a pond.

Pond owners should test their pond water at least once a week in the ideal situation. By recording the test results on a graph or table, it will also help quantify any changes to the water over time.

However, in reality, this is rarely, and pond owners will only test the water as a reaction to noticing when something is unusual or off.

All too often, the results come back as less than ideal parameters, and then the pond owner starts taking action to rectify the situation.

However, what you need to be aware of is that regular testing would help prevent these fluctuations in water conditions and consequently avoid many diseases in the fish.

Pond water should not contain any ammonia and nitrate; however, the aging process will create acidic conditions over time.

The acidification process decreases carbonate hardness and subsequently leads to an unstable pH, which is why it’s important to regularly test the pH levels to prevent it from dropping too low. Pond fish prefer a pH of 7 or 8, and a KH of at least 6dKH, and a GH of about 8 dGH.

Fresh tap water also replenishes lost minerals in aged pond water, which will keep the water at a stable pH value. Once again, as a word of caution, the tapwater must first be treated with a de-chlorinator.

Essentially, what the de-chlorinator does is remove harmful chloramines, chlorines, and heavy metals. Therefore it makes it safe for your fish.

Once again, poor water quality is detrimental to both the health of your fish both directly and indirectly. It can lower a fish’s immune system and makes the animal more prone to infectious diseases.

While some water parameters are poisonous if left to get to extremes, high nitrate will affect the fish’s ability to absorb oxygen in its blood.

This can result in symptoms of not enough oxygen present in the water, and you’ll find that you fish are coming to the surface to gasp for oxygen. 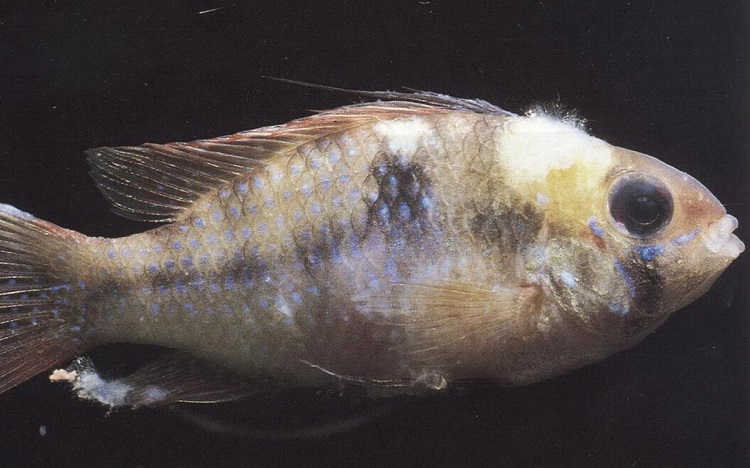 Some of the most common diseases that poor water quality can lead to include common parasites like Itch, fungi, and Anchor worm, which attach to the body of the fish, causing irritation.

Fish can then be seen flashing and rubbing against objects and can have a sunken appearance.

Ich is also known as the white spot disease and often infects fish that are stressed due to pH fluctuations or rapid temperature changes.

Aside from flashing, fish can be seen at the surface gasping for air with clamped fins and white spots resembling white grains of sand all over.

When adding new plants or fish to the pond, you can accidentally introduce these white string-like worms and their larvae to the pond system.

These parasites will then attach themselves to the body of the fish, causing inflammation and red sores at the point of attachment. In most cases, you can use tweezers to remove these worms from your fish.

Inspect your fish and keep an eye out for white or grey fungus growth on the scales giving the fish a cotton-like appearance.

If you only discover one of them showing these signs, place them in isolation, and treats the fungus immediately.

This is a symptom of something larger and is usually due to poor quality that is causing your fish to have a compromised immune system and therefore be open to infection.

So in the meantime, you need to stop feeding and start improving your water quality by doing a 30% water change. The next step would be a light saltwater bath treatment.

You also want to monitor water quality by having it regularly tested, and you can also remove the sores with hydrogen peroxide iodine.

Tail rot is only secondary to the main problem, which could be stress or poor water quality that is causing your fish to be immune-compromised in the first place.

Once immune systems are broken down, they are already susceptible to bacteria that can move in and cause physical damage to the fish.

Dropsy is also referred to as Pinecone disease, and if your fish have this condition, they will show signs of swelling or lifting of the scales. It should also be noted that their eyes will bulge frequently.

If you spot this, don’t hesitate to separate the infected fish from the rest. Pay careful attention to your fish in order to notice the symptoms as early as possible so that your fish can stand a better chance of surviving.

This condition is also referred to as fish ice. These unwanted invaders have eight legs and rounded bodies. They also have big suckers that are used to attach to the fish. Based on their appearance, they are called fish lice.

These parasites can cause significant irritation to your fish and also lead to bacterial infections. The irritation would lead to them rubbing and flashing, which should tip you off that something is not right and try to bring some relief to the pond fish. 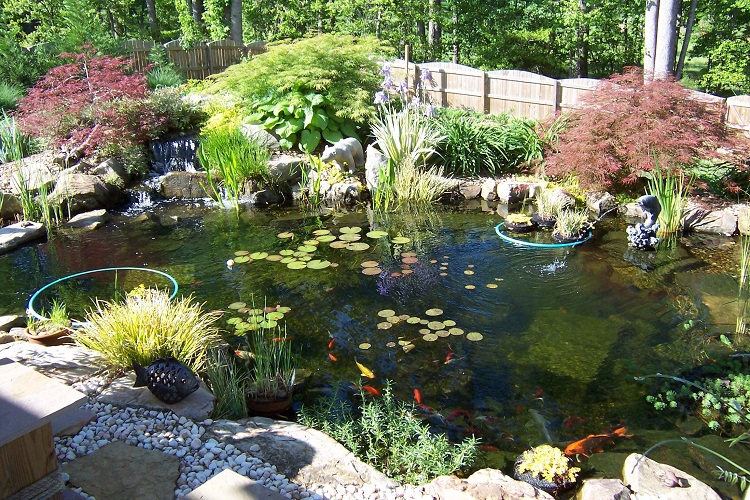 There are a few ways to treat Ich. The first method requires the pond owner to increase the salt concentration of the pond or quarantine tank to about 0.5% over a few days.

At the same time, the temperature of the water should be increased gradually to the mid-80 F and also try increasing aeration. Overall this process should last two weeks and is effective and affordable.

The second method involves the tried and tested method of dealing with parasites in general and involves Malachite green and Formalin. So you may choose to use both simultaneously to ensure that it’s effective.

When it comes to removing Anchor worm, you can remove these using tweezers or small pincers.

Thereafter, rub some Neosporin on the affected areas to treat the fish. In order to clear up this disease, Dimilin is the best product with a good track record.

If water temperatures are cold, it is highly likely that you have fungus in your pond. However, epistylis is also a possibility.

In order to remove fungus gently rub the area with a cotton swab and the infected area must be treated with an antibiotic or antimicrobial cream immediately afterward.

If you’re not sure if you have epistylis or fungus, then try raising the salinity of the pond or quarantine tank, and if it’s a fungus, then it won’t be affected; however, the epistylis will definitely be affected by the saltwater.

The best treatment for mouth rot is a light salt bath and have the treatment of Mela-fix. You can also wash the fish using hydrogen peroxide or iodine.

One of the most effective ways of treating tail rot is doing a 30 – 50% water change of your pond.

Mela-fix is also a good option when dealing with bacteria, and you may also choose to add salt to the pond to go to work on the bacteria and also lower stress levels in your fish.

Dropsy is basically terminal. By the time you see a fish bloated and having standing scales, it means that there is either liver or kidney failure.

So prevention of infection to the other fish is recommended with MedFinn or Debride RX.

As is the case for treating fish lice, Dimilin is recommended and you can see positive results in just a matter of days.

The best way to prevent your fish from getting infected with diseases and ending up sick or worse dead is to regularly monitor water conditions and take good care of the fish habitat.

As they say, prevention is better than cure so by regularly monitoring these conditions; you can help avoid these diseases from coming upon fish.