In recent years, the aquarium shrimp has become a permanent fixture, and people are seeing the benefits of these amazing crustaceans for themselves.

With so many choices in shrimp to choose from and a range of colors and personalities, it makes sense to add a few of these fun characters to your aquarium setup.

What is an aquarium shrimp though, and what purpose do they serve?

Aquarium shrimp is a broad term used to describe a few types of shrimp including neocaridina and caridina. These crustaceans can be kept on their own or added to some tanks and they bring a lot of character and color to the space.

If you’ve been thinking about adding some of these amazing creatures to your existing setup or even raising them alone, you’ll be pleased to know there’s even more to them than meets the eye.

We’ve uncovered some fun facts about aquarium shrimp that make them extra lovable so read on to see what we found out.

These are some lesser known facts about aquarium shrimps that can prove exactly why they’ve become such a popular staple in today’s tanks.

Read on to see what these special shrimps are capable of and a little more about how they live.

#1 They’re Good for Your Aquarium 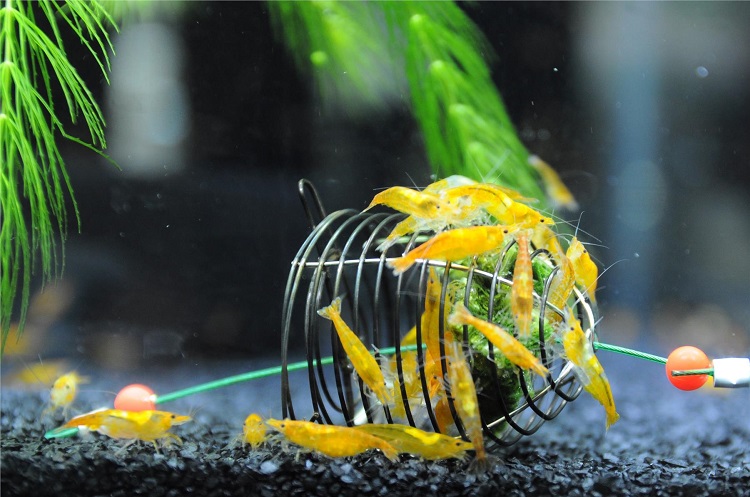 Adding a few shrimp to your tank can add diversity as well, and there are lots of benefits they offer. Shrimps are fairy lively compared to other fish and they’re social as well, which is evident when you look at them.

They can be great entertainment for you and the occupants of the tank.

Shrimp also add a lot of color to an aquarium and help mix things up a bit. They eat almost anything, don’t need any extra care, and will basically look after themselves provided the conditions are healthy inside of the tank.

#2 They Eat Almost Anything 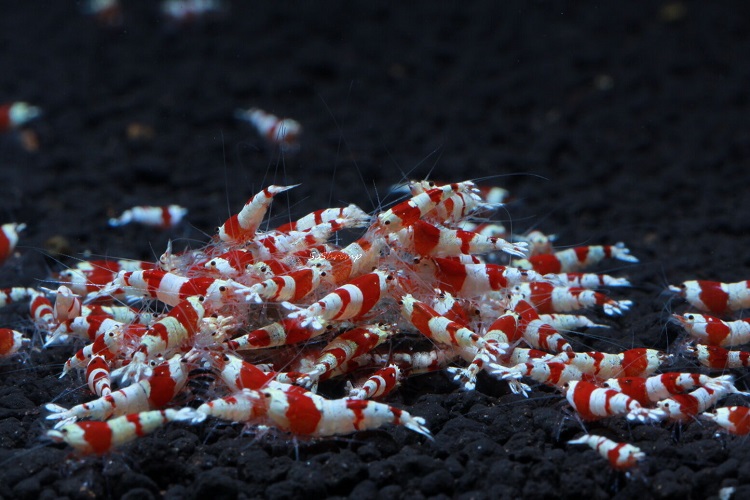 Although it’s good to feed shrimp something they like from time to time, you don’t have to put a lot of effort into doing so. Shrimp are known for eating basically anything when they’re in wild waters and you can put this to good use when you add a few to your home aquarium.

A shrimp will eat both plants and animals, but especially love plankton, and they don’t care if they’re dead or alive which means a lot of waste will be devoured by them in the tank.

Anything that falls to the bottom of the tank they’ll enjoy, and it means less effort for you trying to feed them and clean up after them as well.

#3 You Can Fit Plenty In 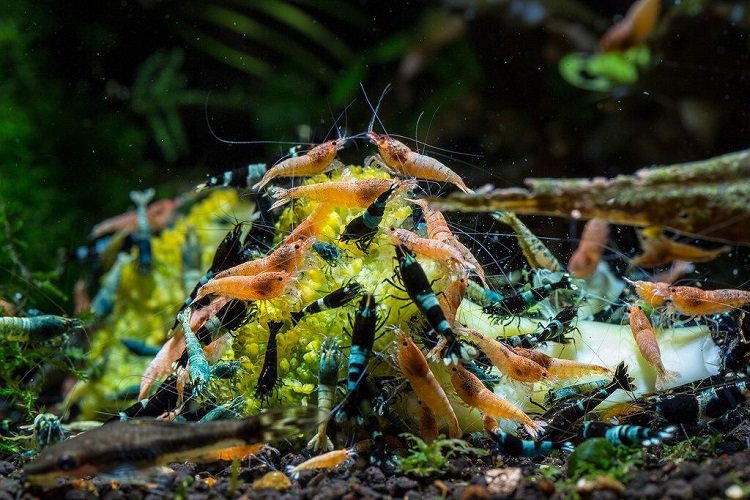 There’s no specific number of shrimp that someone can keep, but it depends on the tank and its capacity, with some other things to keep in mind.

Most aquarium owners follow the rule of 25 shrimp per gallon as this will give them adequate space and also make room for breeding, which they love to do.

If you plan on having a larger shrimp colony, upsize the tank, with around 20 gallons of space you’ll have ample room to do this. The more the merrier when it comes to shrimp, so don’t be afraid to go large, or even dedicate an entire tank just to raising these amazing crustaceans. 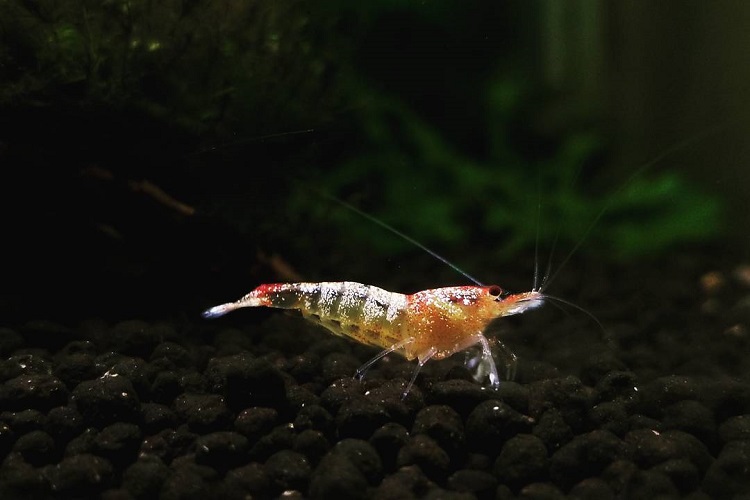 Just like some species of animals, there are certain species of shrimp that won’t come out in daylight either. These shrimp would rather hide away when the sun is out and only come out the play when the lights go down, but some people miss the value of them because of this fact.

One of the main benefits of these types of shrimp, including the popular peppermint shrimp, is that they love to eat the unwanted anemones that can cause harm in saltwater aquariums.

Other than that, they’ll be hiding out in caves and crevices during the night and then come out for dinner when you go to sleep.

#5 They Keep Your Tank Clean 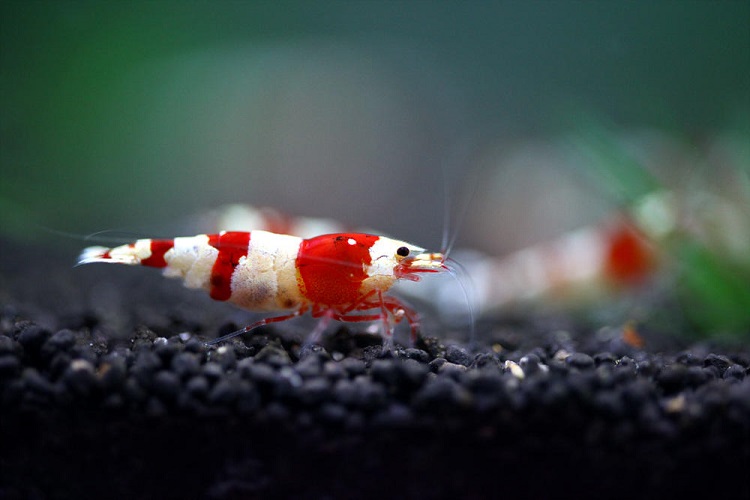 As discussed earlier, a shrimp is a good eater, and they’re not fussy about what they eat either. This means they’ll work hard at cleaning the tank without even realizing it so there’s less time you have to spend doing the job.

Not only do shrimp feast on other dead livestock but they love to eat algae, and will even strip it straight from the wall of the aquarium.

As one of the pestiest parts of aquarium ownership, having a few shrimp in your corner who can help you with cleaning makes them worth their weight in gold. 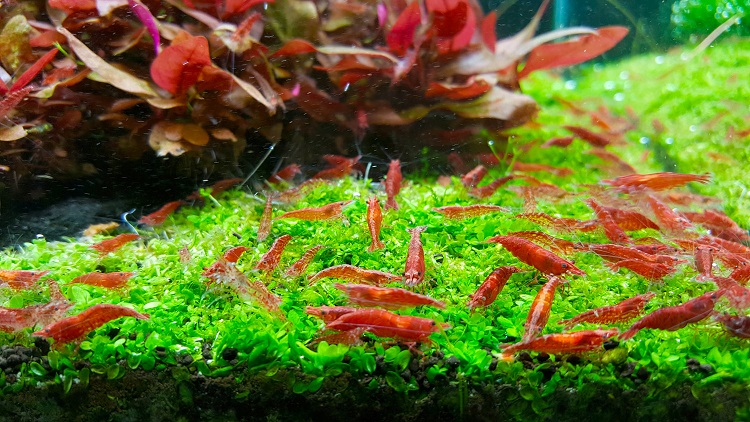 If you don’t want to buy a bunch of shrimp to start which, the good news is they’re easy to breed without doing anything else.

This is mainly helped by the fact that shrimp can carry their eggs underneath their body and are taken care of before they’re ready to hatch.

One of the easiest breeding shrimp is the cherry shrimp, and if you have just two of these in your tank, there’s a good chance you’ll eventually see more. You can even spot the eggs that the female carries after a certain point which is always fun to watch as well. 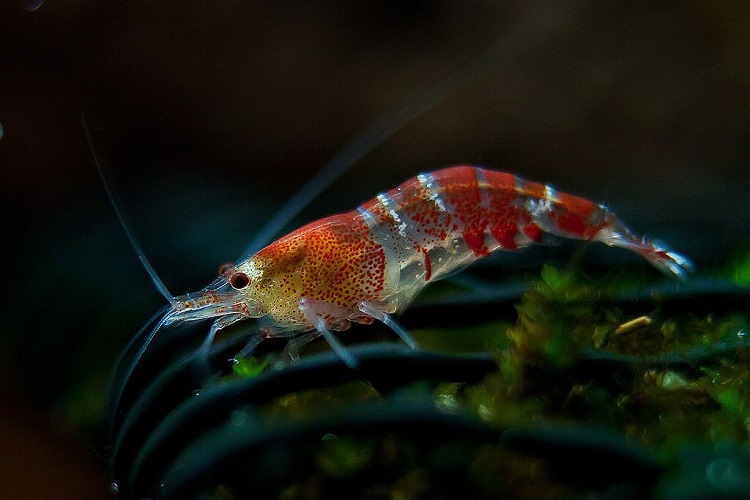 If you’ve never owned shrimp before and decide to get some, you could be in for the shock of your life when you see what appears to be their dead body on the floor of the tank. Rest assured, your shrimp has not died, but rather molted as it goes through growth phases.

Shrimp are capable of shedding their skin and they do so regularly while they are young.

It’s normal for a shrimp to molt around once a week which means lots of empty shells in your tank to clean. To tell the difference between this shed skin and a genuine dead shrimp, a deceased one will be more pink in color than when it’s alive. 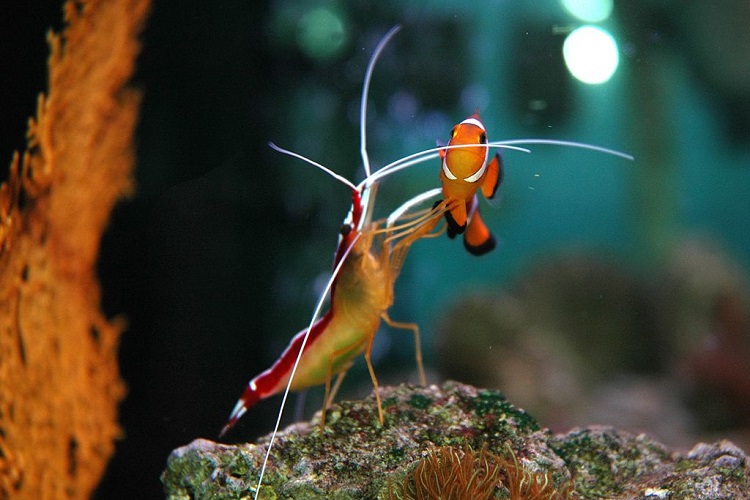 Just because you have dreams of owning shrimp in your aquarium, doesn’t mean you have to give up on having fish as well. Shrimp get along with many types of fish and can coexist peacefully, having done so for millions of years in the real world.

Some of the more friendly fish that are better housemates for shrimp include Guppies, Ember Tetras, Sparkling Gourami, Pygmy Corydoras, and Celestial Pearl Danio.

Although these are better at getting along than others, things still do occur in nature, but you’re guaranteed a much more peaceful experience for the shrimp when you fill your tank with these.

Aquarium shrimp are just one fun way you can add some life into your tank, and they’ve been growing in popularity during recent years.

If you’re still a little hesitant about introducing a shrimp or two into your aquarium, you simply need to find out more, so read on to see the answers to some commonly asked questions about them.

What’s the Difference Between a Prawn and a Shrimp?

Although both crustaceans, there are quite a few differences between prawn and shrimp. Prawns tend to have longer legs and also more of them, with three pairs compared to the one that shrimps have.

Prawns aren’t usually kept in an aquarium so if you’re looking for a crustacean to add, the shrimp is the better option.

Is the Black Line in Shrimp Its Poop?

The visible black line that you can see in most species of shrimp is in fact its intestinal tract which contains waste. This vein usually runs on the back of the shrimp but isn’t always visible and might not be obvious.

If preparing shrimp for consumption, it’s best to devein this so that it’s not eaten, however this isn’t necessary for the type kept in an aquarium.

What Conditions Do Shrimp Live In?

There are many species of shrimp and they thrive in varying conditions depending on their type. Some prefer colder water and others warm, and some live in fresh water while the others are in salt water.

For aquariums, most live in fresh water tanks as it’s not as common for domestic aquariums to feature salt water, so choose one that is native to this surrounding.

What Do Shrimp Need in a Tank?

Shrimp need much the same that other fish and livestock need in an aquarium, but you should research the specific type of shrimp you want before setting it up to make sure you have them covered.

Some items they require include lights, driftwood, shrimp friendly filter, plants, and heater and thermometer.

Hi,I am a fish enthusiast in Lagos,Nigeria. I have been fascinated with the prospect of raising shrimps for ages and will appreciate some tips from you, seeing that you have such a great length of years of experience in raising fish.