You are here: Home / Blog / Aquarium Bubblers – Cheap and Effective but Are They Necessary? 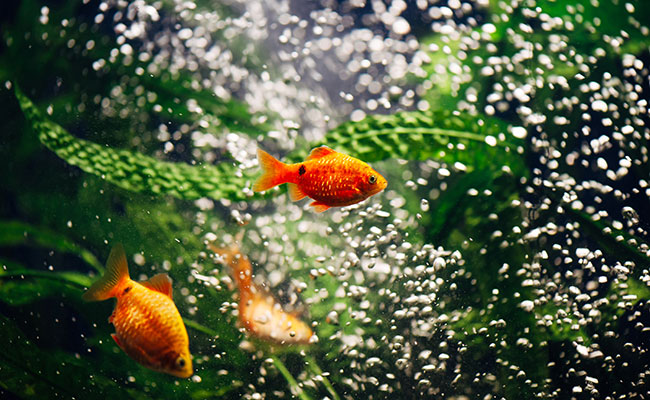 As a kid, I remember staring at our goldfish tank for hours.

The way they floated through the water in a hypnotizing rhythm was fascinating.

That was my first experience with an aquarium bubbler… A memory that was long forgotten until a beginner aquarist asked me:

What do aquarium bubblers do?

It was that very question, along with the fond memories, that inspired this article.

Today, I am going to teach you everything you need to know about aquarium bubblers!

What is an aquarium bubbler?

A bubbler refers to any device that attaches to an air pump, via an airline tube, in order to create bubbles inside your aquarium.[1]

Examples of bubblers include airstones, bubble wands and bubble walls.

What does an aquarium bubbler do? 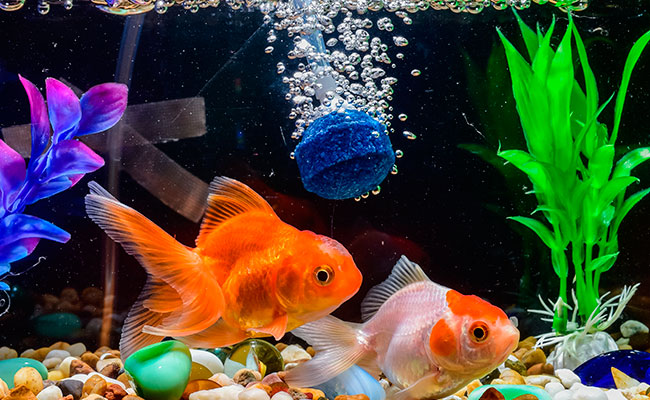 On its own, a bubbler performs two helpful functions:[2]

Just like you and me, fish need to breathe.

To do this, fish draw dissolved oxygen out of the water – without it, most breeds of fish will suffocate.

Bubblers add oxygen to your aquarium. But not how you think…

It may seem like oxygen would enter the water from the bubble. But this only contributes an incredibly small amount, so little in fact that it is barely worth mentioning.

Most of the oxygen in your aquarium enters from the surface and dissolves into the water through a process known as gas exchange.

When the surface is still, less oxygen enters the water than when it is moving.

Think about fish that live in rivers and oceans. The visible water on the surface is constantly moving, allowing for a greater amount of oxygen to enter the water.

A bubbler does the same thing, on a much smaller scale.

As the bubbles rise, they agitate the surface, allowing a greater amount of oxygen to enter the water.

As the air bubbles rise, water rises with them. This creates a current that circulates water around your tank.

Because the bubbles gently rise, the result is often a gentler water flow than if using a powerhead that shoots across the tank.

Of course, if you already have a good filter, lily pipe or spray bar providing circulation, then there is hardly any benefit to adding a bubbler… Which brings me to my next point…

Do you need an aquarium bubbler? 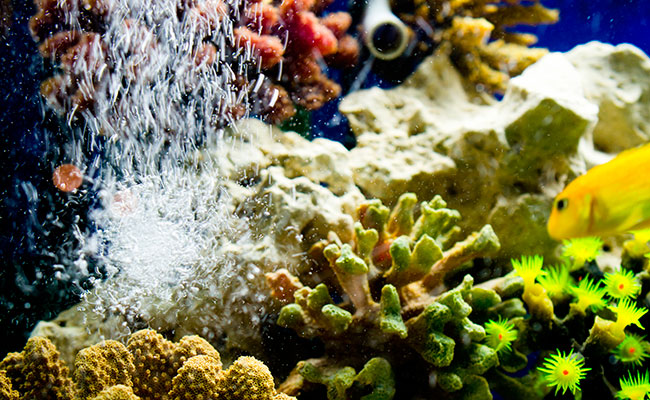 An aquarium bubbler is a funny piece of equipment.

In many tanks, the benefits of a bubbler can readily be achieved with equipment that is already in the tank.

For example, you could aim your filter return toward the surface of the water or use a circulation fan to similar effect.

Saltwater tanks in particular should have filtration and circulation that beat any bubbler.

However, for smaller freshwater setups, an aquarium bubbler can be beneficial.

Whether you need a bubbler entirely depends on your setup. Many people use bubblers when creating a DIY equipment such as sponge filters – the bubbler is used to “drive” the filter, causing it to draw in water.

If your water is not circulating or low on oxygen, then a bubbler could be just what you need!

Note: The breed of fish also determines whether you need a bubbler. Certain fish have adapted to stagnant water, like betta, and can even draw water from the surface. In this case, the water movement caused by a bubbler can actually stress the fish.

What are the downsides to aquarium bubblers? 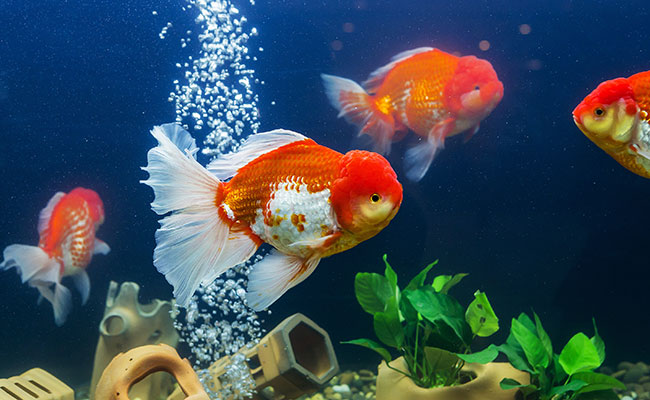 If you are considering a bubbler for your aquarium, there are a couple of downsides that you should be aware of:

This downside is a matter of personal taste.

It is difficult to ignore the rising trail of bubbles emitting from an aquarium bubbler.

Even if you hide the bubbler behind plants or in the substrate, the stream of bubbles is clearly visible.

While some aquarists, or me as a child, find that the stream of bubbles enhances aquariums, others think they are ugly and unnatural – not exactly suitable for a display tank.

Let’s face it – if you have a saltwater tank, you are not likely to buy a bubbler anyway.

But just in case you were considering it…

While you might not be able to see it, when the bubbles pop at the surface of your aquarium, they splash tiny amounts of water.

On its own this wouldn’t be a problem. But in a saltwater tank, as the water dries, it leaves behind a small amount of salt crystals.

It is for this reason that most saltwater tank owners recommend using a circulation pump, also called a circulation fan or wave maker, since it can provide the same benefits as a bubbler without the salt creep.

What are the different types of aquarium bubblers?

Bubblers come in different shapes and sizes. Below I cover some of the most common types of bubblers you will come across.

Simply place these bubblers on the end of your airline to fill your aquarium with bubbly goodness.

Cheap and effective, airstones are the most common type of aquarium bubbler.

Despite the name, airstones can be made from any porous substance including wood, sand, stone and even plastic.

Airstones can be small… 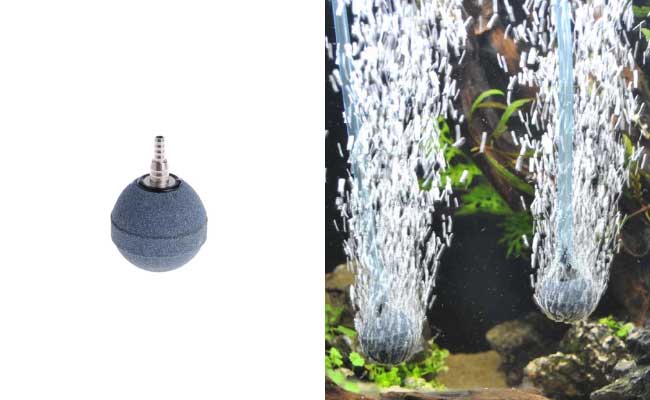 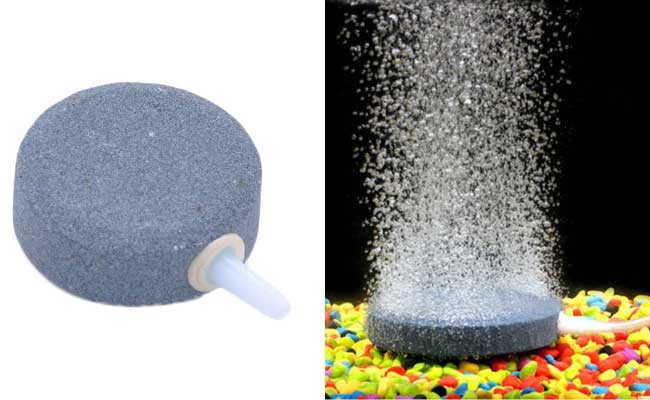 Or, come in any shape…

While these are essentially just long, narrow airstones, they are commonly referred to as bubble wands.

The bubble wand gives off a wall of bubbles, lending the aquarium a distinctly different look to smaller airstones.

Most bubble wands come with suction cups to prevent them from floating around your aquarium. 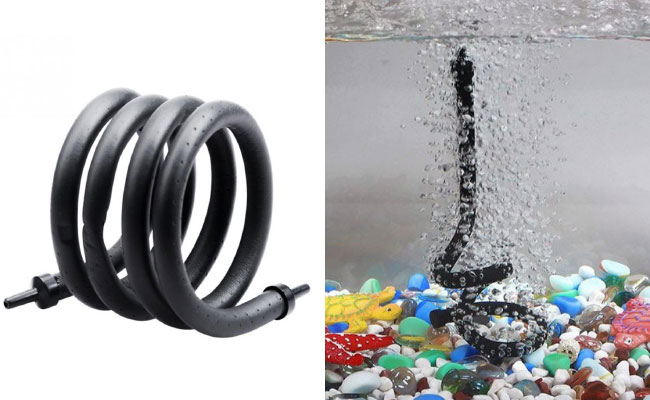 Bubble walls come in a variety of different lengths and are made from a flexible rubber material. The bubble wall can be twisted, coiled or spread around the tank in any way that you see fit.

Small holes are dotted along the surface to let bubbles escape from the hose and into the water.

If you are considering using a bubble wall, be aware that you will need to clamp or weigh the hose down – especially if you are trying to display your bubble wall horizontally. Otherwise, it will float to the surface. 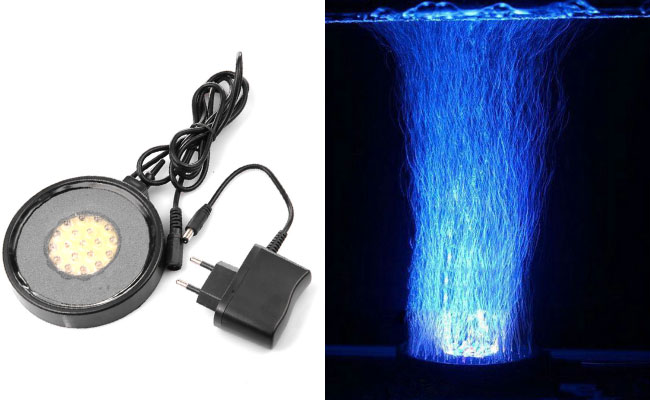 Let there be light!

An LED bubbler is essentially an airstone with an LED light. In addition to needing an air pump, this bubbler also needs to be plugged into an electrical outlet.

As the colored light shines through the bubbles, it creates a mini aquarium light show, especially when paired with GloFish. [3]

Most LED bubblers come with a remote control, allowing you to change the color to match the décor of your room. 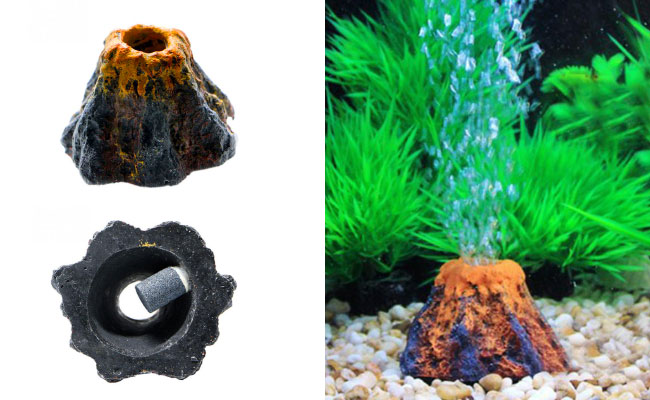 Bubbler ornaments can take on any shape or size – from sunken treasure chests that open and close to small-scale cities. There are no limits!

Despite the wide variety of sizes, bubbler ornaments often use one of the previously mentioned ways to create bubbles – typically an airstone. 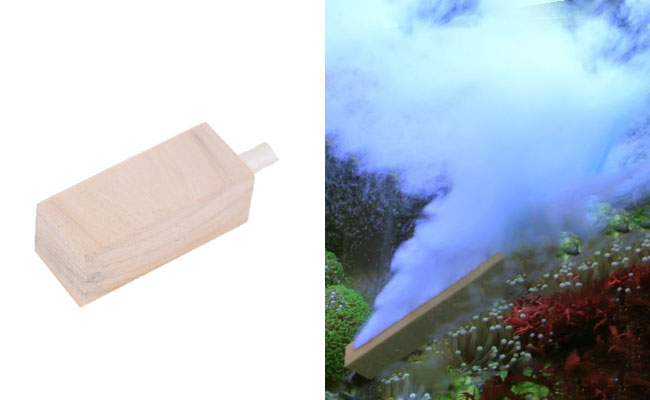 There is no arguing. If you want the smallest, finest bubbles possible, you want an airstone made from limewood.

Despite the name, this wood doesn’t come from a Lime tree but rather Lindens. The wood from these trees contains tiny pores and when air is pumped through it, it diffuses bubbles in a fine mist.

Note: If your protein skimmer requires fine bubbles to operate, limewood is exactly what you need. Just remember that you will need to change the airstone every 3-6 months because they will eventually clog in the salt water.

The effectiveness of a bubbler depends entirely on the strength of your air pump. One that is too weak won’t be able to provide the pressure needed to push air through and create bubbles.

This is a problem most commonly seen with larger aquarium bubblers where the air pump is not powerful enough to push air through the entire surface of the bubbler.

The problem is easily overcome by purchasing a stronger air pump.

If you notice that bubbles only exit from the base of your bubbler, it’s possible you have a leak. This is particularly common with cheaper airstones where the base has not been glued on properly.

In most cases, you will be able to fix this problem by using epoxy resin to seal the leak.

While aquarium bubblers are not ideal for every setup, they still have their uses.

Do you want to learn more about the bubblers? Then read about other parts connected to them, such as air check valves, airline control valves, and airline tubing.

Do you use a bubbler in your aquarium? Let me know in the comments below!

Hi, my names Ian. I have been keeping fish for over 30 years. I can’t wait to teach you about the hobby!

Content found on fishlab.com is for informational purposes only and is not intended to be a substitute for professional veterinarian advice.

Check out our sponsors